The ability to quickly perform large numbers of chemical and biological reactions in parallel using low reagent volumes is a field well addressed by droplet-based digital microfluidics. Compared to continuous flow-based techniques, digital microfluidics offers the added advantages such as individual sample addressing and reagent isolation. We are developing a light-actuated digital microfluidics device (also known as optoelectrowetting) that optically manipulates nano- to micro-liter scale aqueous droplets on the device surface. The device possesses many advantages including ease of fabrication and the ability for real-time, reconfigurable, large-scale droplets control (simply by altering the low-intensity projected light pattern). We hope to develop Light-Actuated Digital Microfluidics into a powerful platform for lab-on-a-chip (LOC) applications. 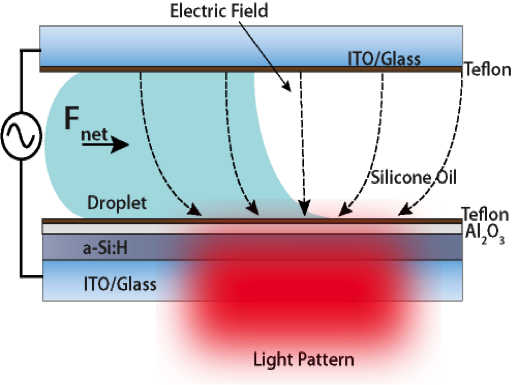 Fig. 1 illustrates the operating principle of the device. It consists of a microfluidic chamber sandwiched between a photosensitive a-Si:H electrode coated with an electrically insulating oxide layer (bottom) and a transparent electrode (top), a thin hydrophobic layer then coats both surfaces. In the absence of light, the applied AC voltage drops primarily across the highly resistive a-Si:H layer. However, upon illumination, the conductivity of the a-Si:H increases by more than 100x. This causes the voltage to drop primarily across the electrically insulating layer. In other words, the a-Si:H layer acts as a switch that is activated by light which shifts the majority of voltage drop from the photoconductive layer in the “off” state to the dielectric layer in the “on” state. Thus, the illuminated area is analogous to an electrically biased electrode, or a ‘virtual electrode’. If the virtual electrode is created only on a fraction of the droplet’s contact line, a net electromechanical force acts on the droplet and translates it towards the illuminated region. Fig. 2 and Fig. 3 showcase the capabilities of this device, where parallel movement and array formation of droplets are demonstrated, respectively.